Jokowi's promises to solve past abuses in 2016

(Source: The Jakarta Post, 09-01-2016): President Joko "Jokowi" Widodo has expressed a commitment to resolve a number of past human rights violations by the end of this year [2016]. In a dinner with journalists on Friday night, the President said he had ordered the coordinating politics, legal and security affairs minister, the attorney general, the National Police chief and the head of the National Intelligence Agency (BIN) to seek comprehensive resolutions to unresolved cases of human rights violations.

The President himself did not mention which human rights violations in particular would be addressed. In a move to show that he is different from his predecessors, Jokowi has repeatedly reiterated his commitment to settling past rights abuses. Nevertheless, he has been criticized for his poor performance on human rights, which is far from his election campaign promise to improve their protection in Indonesia. 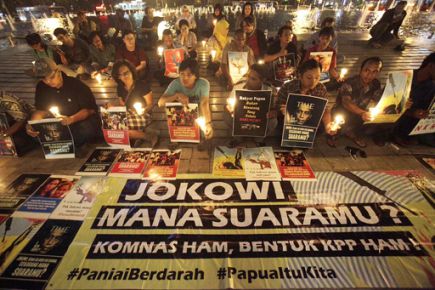 Several human rights violations occurred in 2015: Christian-Muslim strife in Tolikara, the burning and demolition of Christian churches in Aceh Singkil, the fatal beating of an anti-mining activist in Lumajang, the creation of internal Shia and Ahmadiyah refugees because of intra-Muslim religious intolerance and the criminalization of freedom of speech and expression are among the cases.

Meanwhile, older unresolved rights cases include a 1989 massacre in Talangsari, Lampung, the forced disappearance of anti-Soeharto activists in 1997 and 1998, the 1998 Trisakti University shootings, the Semanggi I and Semanggi II student shootings in 1998 and 1999, the mysterious killings of alleged criminals in the 1980s, the communist purges of 1965 and various abuses that took place in Wasior and Wamena in Papua in 2001 and 2003, respectively.