Precise incidents remain unclear. Prabowo Subianto is said to have been actively involved in the turbulent times before his father-in-law, former President Soeharto was forced to step down. The kidnappings of students in 1997-1998 by the so-called Tim Mawar (the Rose Team) and the riots of May 1998 are both said to be an effort to facilitate a change of leadership, with general Wiranto as his direct rival.

By decision of the Honorary Council for Officers (Dewan Kehormatan Perwira, DKP) Prabowo was dismissed from his position in the army in August 1998 for exceeding orders in relation to the kidnapping of anti-Suharto activists (Kompas). The Honorary Council consisted of a number of colleague generals like Subagyo HS, Fachrul Razi, Yusuf Kartanegara, and later President Soesilo Bambang Yudhoyono.

After that he lived abroad for a number of years, but no formal procedure has been carried out. During his second effort to run for president (2014) Prabowo's involvement in human rights violations was again discussed publicly. Even the verdict by the Honorary Council for Officers of the TNI was published. 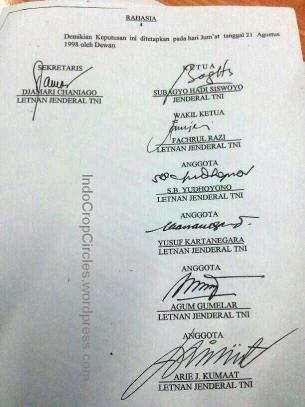 Still there has not any formal investigation been carried out. The leakage was said to be the result of manipulation by Prabowo's politcal rivals (like Wiranto) or even meant to threaten the national stability.

After a few years abroad, he quietly came back in Indonesia and joined the Golkar party. In 2008 he left the Golkar and joined/established the political party Partai Gerakan Indonesia Raya (Party for the Great Indonesia Movement, Gerindra), and was nominated  presidential candidate in 2009. He joined Megawati Sukarnoputri for President as her deputy. The team earned 26.79 %, with Susilo Bambang Yudhoyono (SBY) and his running mate Boediono winning 60.80 %. The third team of candidates (Jusuf Kalla - Wiranto) got 12.41 %. In the general elections of Parliamentary Seats in 2009 the party Gerindra won 4,5 % of the votes in the legislative election (DPR), 26 seats of a total of 560.

Prabowo ran again for president in 2014. The results showed that Joko Widodo had won 53 % of the votes, and Prabowo 47 %. Just before the results of the elections were published, Prabowo retracted from the procedure, as to evade to have to ackowledge his defeat.